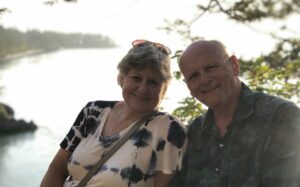 The Casper Children’s Theatre worked with the Stedillie family to establish The Michael and Ebba Stedillie Scholarship Fund in order to provide $500 scholarships to young performers in our community.  Michael and Ebba know that theatre can change lives.  Michael found his vocation in ninth grade after being cast in a production of “Oliver.”  He and Ebba met doing summer stock shows at the Post Playhouse in Fort Robinson, Nebraska in 1973, and the two have been contributing to the theatre community ever since.  After moving to Wyoming in 1986, Michael taught theatre and stage craft, among many other classes, at Kelly Walsh High School until his retirement in 2015.  Both he and Ebba have directed and appeared in many plays at Stage III, and Michael has appeared in many summer musicals at Casper College.

This scholarship was established to honor the Stedillies and their contributions to the Casper theatre community, but most importantly, to give young performers the chance to find their home in the performing arts the way that Michael and Ebba did, regardless of a child’s financial status.  Whether you are new to theatre and want to give it a try or you are an established performer who wants to continue to hone their craft, this scholarship is for YOU!

Scholarship applications must be completed by midnight on July 30.  Recipients will be notified on July 31 in time to register for fall productions.  Each scholarship is worth $500 and can be used in any combination for any CCT production, workshop, or camp for the season, which runs from September 1 through August 31 of each year.

STEP TWO: Within 48 hours, you’ll receive notification by email that your application has been successfully received or with a request for additional information.

STEP THREE: Watch your email and social media for the winners of the Michael & Ebba Stedillie Scholarship on July 31st.

STEP FOUR:  If you are a winner you will be asked to choose which productions you would like to apply your scholarship to.